Following on from a successful exhibition in 2016, Venture Arts returned to The Manchester Contemporary in October 2017.

This year the space – run in partnership with Castlefield Gallery – was curated collaboratively between two young and emerging curators, James Desser (Venture Arts) and Tom Emery, and featured significant new art work from digital photography and illustration, to ceramics and sculpture constructed from found objects.

Submissions came from a wealth of artists working at studios run by ActionSpace in London and Project Ability in Glasgow, as well as artists working from the Venture Arts studios in Manchester. 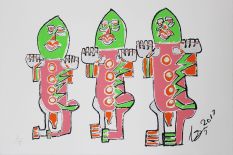